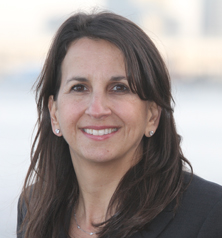 Carolyn is a trial attorney and partner with the maritime law firm of Latti & Anderson LLP. Latti and Anderson LLP specializes in representing fishermen, lobstermen, merchant seamen, longshoremen and harbor workers in addition to passengers injured on boats, ferries and cruise ships as well as families who have lost loved ones because of an injury on the water. Their injury law practice also involves representing families in car accidents, hit and run accidents and personal injury claims.

Carolyn M. Latti is a maritime trial lawyer and a partner of the law firm of Latti & Anderson LLP and one of the highly regarded maritime Plaintiffs’ attorneys on the East Coast. Carolyn focuses on admiralty law, representing those who work on or around the sea, such as fishermen, and merchant seamen, dockworkers  as well as passengers of nautical vessels such as yachts, boats, ferries and cruise ships.  She has been a pioneer in this male dominated profession for more than 2 decades.

Carolyn has achieved her success through balancing compassion for her clients with the skill to have the stories and rights be heard.  The understanding of her cases combined with the many hours of hard work and unyielding perseverance are evident to the love for what she does. The daughter of maritime attorney Michael Latti, her summers as a child were spent in Maine and on Cape Cod, sailing, fishing, working on the water and building her own firsthand experience with the sea. As the youngest of four children, she often found herself having to argue her way out of trouble, sometimes facing down bigger and stronger siblings to make sure she was heard.

Carolyn’s love for being a trial attorney is best found in the courtroom where her skill at trying a case is reflected in how she captures the story of her clients within the context of the entire case.  For better or worse, she will use the facts and law she has bring all that are applicable and put her hard work before the jury in a clear and concise story for their determination.  Carolyn has handled cases throughout the United States, practicing in federal and states courts.  In fact, she was even involved in litigation of an injured seaman in Scotland and has dealt with entities from Greece to Oman.  What Carolyn treasures about her maritime law practice are the relationships that she develops with her clients and their families by learning as much as she can about them and develop relationships with her clients that last well beyond their case being resolved.   She marries her own success with the success of her clients and her results both in and out of the courtroom show how effective that can be.

Family is one of the most important things to Carolyn, which is why she has always been willing to work so hard to either preserve or rebuild a client’s life after an injury or death.  Carolyn is married and lives with her husband, a former Assistant District Attorney, and their children. One of Carolyn’s favorite ways to spend time with them is to jump in the kitchen with them and whip up something delicious or watching her children competing in sports and attending their school events.