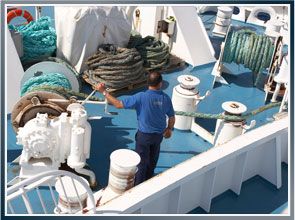 A Maine lobsterman died this month after falling off a boat near Jonesport. The lobster boat crewmembers contacted the U.S. Coast Guard, but the lobsterman was dead by the time they arrived in spite of CPR attempts. The lobsterman left a wife and a young son behind.

Falling Overboard is a Leading Cause of Maritime Accidents

According to the Centers for Disease Control and Prevention (CDC), there were 210 reported fatal falls overboard in the U.S. between 2000 and 2014. None of the victims were wearing personal floatation devices. Approximately 53 percent of these deaths occurred when fall was unwitnessed by other crewmembers. That said, crewmembers should avoid working alone at all times.

Falling overboard does not just entail falling into open sea. Maritime workers have also been known to fall between vessels and barges while loading cargo or handling fishing gear. Commercial fishermen are particularly susceptible if safety precautions aren’t taken, as they work with handling fishing gear over the sides of vessels.

Worse, rescue efforts can be difficult and can place other crewmembers at risk for falling overboard as well. Those who do are susceptible to hypothermia, drowning and a variety of other dangers out at sea.

How to Survive a Man Overboard Accident

Unfortunately, in man overboard (MOB) accidents at sea, victims are vulnerable to what is called “Cold Shock Response.” When this happens, the sudden fall in skin temperature prompts the victim to take a reflexive gasp of air. This involuntary response usually causes them to swallow seawater and can cause drowning. According to a study in Portsmouth University, 60 percent of MOB deaths occur within the first few minutes of entering the water. Here are some steps to take if a crewmember falls overboard:

Latti & Anderson LLP is a maritime injury law firm that fights for those injured at sea. We have been helping maritime workers for more than 50 years.