Home » What Should I Do If My Boat Catches Fire?

What Should I Do If My Boat Catches Fire?

During a day trip off Cape Disappointment, a Washington-based wooden crab boat caught fire with the skipper and two deckhands on board. One of the deckhands heard odd sounds coming from the engine room. He remembered that the vessel’s hydraulic system, which had been a problem before, had recently been repaired.

Just as he entered the engine room, a line burst, covering him in burning hydraulic fluid. As the room was engulfed in flames, his clothes caught fire; the crewman was forced to make his way out of the smoke-filled engine room by feeling his way along the scorched walls.

As he emerged, the second deckhand raced over to beat the flames out. He also removed as much of his fellow crewman’s hydraulic fluid-soaked clothing as he could, but some pieces were already fused to the man’s flesh.

The captain saw the heavy smoke pouring from the vents, and as the vessel’s alarms began to wail, he immediately issued a mayday. He then crept through a window and managed to launch the life raft. He tied it off to the vessel’s starboard side, and got both crewmen into it. Before following them in, he made one last radio call for help to local crabbers he knew were in the vicinity.

Within the hour, the Coast Guard arrived and took the crew to port. The injured deckhand was flown to a regional burn center, where he was treated for second- and third-degree burns to his hands, chest and face.

What Should I Do After I suffer Burn Injuries on a Vessel? 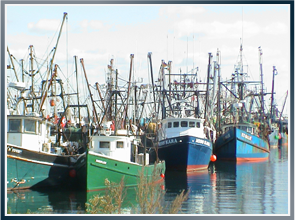 The deckhand miraculously survived, but many in similar situations have not been so lucky. Our law firm has represented many seaman who have been burned from fire, steam and chemicals and understand the complications that can arise from burn injuries and how to make sure the injured seaman receives all he is entitled to  under the law.

If you have been the victim of maritime negligence or general unseaworthiness, call Latti & Anderson today—we can help you navigate the tricky waters of maritime law and earn the compensation you deserve!

Latti & Anderson’s Little Extra: The USS Forrestal caught fire off the coast of Vietnam in 1967, burning for nearly 24 hours before help could arrive. One hundred thirty-two crew were killed in the fire, which led to the U.S. Navy requiring all sailors to receive Damage Control Training.