Earlier this year, England was terrified by rumors of a ghost ship—filled with cannibal rats—drifting towards their peaceful shores.

Luckily, the rumors turned out to be just rumors. Here is what really happened:

Last January, the tugboat Charlene Hunt was assigned to tow the decommissioned cruise ship Lyubov Orlova to the Dominican Republic, where the cruise ship was set to be scrapped. Approximately 19 hours into the journey, however, they hit winds estimated at 40 knots (22 mph).

The tow line snapped. For two days, the tugboat stayed close to the Lyubov Orlova and frequently reported to Marine Communications and Traffic Services.

Ten-foot waves and a mechanical breakdown forced the tug to abandon the larger ship; crewmembers sought shelter and began repairs. They were unsuccessful, however, and the Lyubov Orlova was left derelict and adrift. 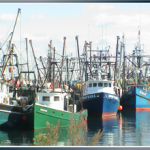 As the ghost ship floated into international waters, it was determined that she posed no threat to nearby oil and gas operations. Officials cited safety issues as the reason there was no salvage operation.

The ship could have ended up anywhere from Iceland to western Africa. Ironically, the ship was never actually spotted from England, and experts believe that the ship sank 1,300 nautical miles off Ireland.

Had proper safety guidelines had been followed, this disaster could have been averted. A 300-foot long, 4200-ton ship being left to drift and sink puts all other ships and crew in the area at risk, and creates untold ecological damage.

The Canadian Transportation Safety Board investigation showed that the tug was not sufficiently prepared for the environmental conditions it would encounter. Had an inspection been performed before departure, many of the problems would have been identified. The company responsible for the towing operation must absolutely be held accountable for the negligence that caused the Lyubov Orlova to be lost.

I Need an Experienced Maritime Attorney for My Tugboat Accident

Tugboat accidents are largely preventable when boat owners and supervisors observe safety precautions and regulations. When workers are injured, this can lead to claims of negligence and unseaworthiness. If you have been injured while working on a towboat, you may be able to seek reimbursement for your pain and suffering, as well as lost wages and medical bills.